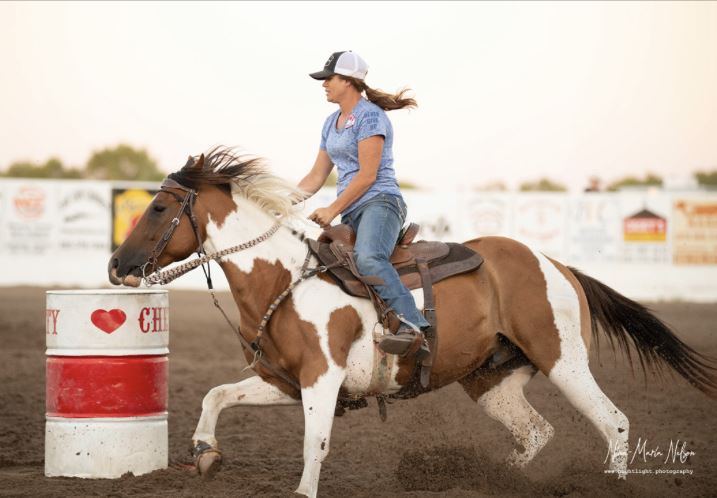 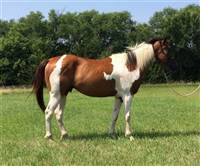 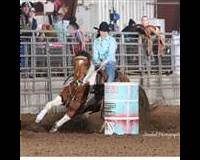 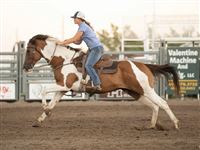 Legend runs anywhere from 2D to top 4D. If he runs in the same arena multiple times, he gets more solid and confident.

Legend was not started under saddle until the winter of his 4/5 yr old year. I've ridden him sporadically, as I train full time and my horses get the short end of the stick. He's been late to mature mentally, so I've never pushed him, just let him pick up speed on his own as he gains confidence. If you were to really push him, he would lose composure; so he needs someone who can stay relaxed and patient, and let him keep coming along at his own pace. He is a free runner and wants to work, so he picks his own speed as he's ready for it.

He's an anxious horse. He does not take pressure well. He wants to work, and get along, but he needs a very quiet and confident rider. You can correct him and work him on the pattern if you need, but not "get after" him by jerking and spurring. He doesn't need it and won't tolerate a rough hand. This is not a youth horse--he's safe, but needs a horseman. He needs a person to be able to ride with their body and help him through the pattern, not just kick and pull.

He has a huge heart and work ethic, and can flat fly. He always clocks; he could be a force with a good rider and more runs and confidence. He rides around nice--not silly. He's pretty broke, soft in the face, rates and stops off your seat. No buck or rear. You can work him at home however you want, and he’s pleasant. The biggest thing he does wrong is gets pushy in the bridle and front-endy when he’s nervous.

Good at the gate, you can exhibition him if you want, and he’s relaxed and will do what you want. But, he doesn’t usually need exhibitions, especially if it’s somewhere you’ve been.

I’m wanting to rodeo the next few years, and he won’t take that atmosphere. He needs a quiet, relaxed rider that wants to enjoy jackpots. This is why he is cheap.

He does really well on Silver Lining Herbs Keep Cool. I would highly recommend keeping him on it. He's sound. I did inject his hocks this spring for the first time as I had suspicions he was sore, but haven’t since. I've never put shoes on him; even though he has white feet, they don't crack.

He needs ulcer prevention when hauling, and occasional chiro (maybe 2x a year). He does very well with PEMF therapy.

No payments, no trades.