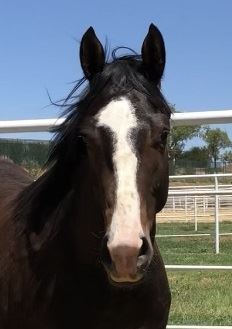 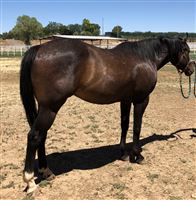 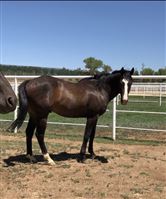 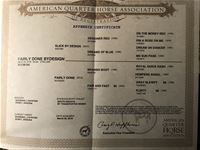 Rickey is a great-minded colt with 45 days of training and he’s ready to go to a new home where he’ll be patterned. He has been used to push cows in and out of the arena due to his great mind. He has a big stride, is a real free mover and is very athletic- he is sure to win someone some money when he goes down the alleyway.

Rickey is sired by NFR Qualifier & AQHA World Champion Slick by Design (LE $621,566) who clocked the fastest time ever run by a stallion at the NFR. Slick is the sire of multiple futurity champions and money earners to the earnings of $1.3 million including Pink Buckle Futurity Champion Slick Lane ta Fame, Slicks Lil Amigo, Slick N Black, and RR Too Slick Eyemist among others. Slick is sure to dominate the leading sires list int he next few years.

His dam, Fairly Done, was sired by Spanish Boot, SI 104, the Grade 1 winner of the Blue Ribbon and Kansas Futurity, earner of $128,000+ on the track and has progeny earnings of $1.8 million on the track. Spanish Boot is the barrel horse sire of the 2011 AQHYA Reserve World Champion in Barrel Racing, Bountiful Bootie, and she was the 2010 WPRA Finals Derby Reserve Champion. She has Equistat earnings of $10,340+ and has won numerous saddles & buckles in high school and college rodeos across Texas. Booty is the dam of Holdinalltheseises, the 2016 Josey Reunion 1D Champion, 2016 Fort Smith Futurity finalist and 3rd in the Greg Olsen slot race. In addition, Bountiful Bootie’s full brother, Boot the Coyote, was a Speedhorse Silver Cup finalist his futurity year and placed 8th at the WPRA Finals Derby.

He is sound and vet checks are welcome at buyer’s expense. He is priced at $15,000, which will increase with more training.