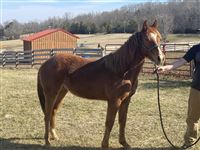 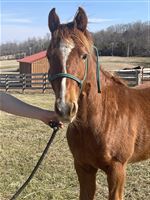 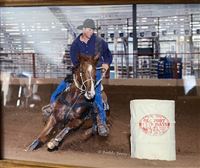 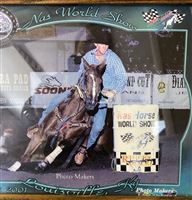 “DOITTOEM HEAVENLY” also known as Esther is a 2 year old sorrel filly by JL DASH TA HEAVEN out of DOITTOEM LIL MARTHA. Doittoem Lil Martha has approx 50,000 in LTE with approx 30,000 of that equistated, with her career being cut short due to injury. She was Old Fort Days Futurity Concellation winner with the 4th fastest time of the show, Future Fortunes Round Reserve Champion at the BFA in Oklahoma City, an arena record breaker, and had a great open career, until cut short. Esther’s granddam is DOITTOEM MARTHA, who was a Futurity, Derby, and Open standout, including winning the 1D NASHORSE WORLD CHAMPIONSHIP in 2001. DOITTOEM MARTHA had EQUISTATED LTE of over 100,000, and tons more non equistated earnings. Esther’s birthday is in April. She will be ready to break later in the year. She is being handled on the ground, and is very smart, and friendly. SHE IS PAID UP IN FUTURE FORTUNES, THE RUBY BUCKLE, AND THE BREEDERS CHALLENGE. There is a lot of grit and talent bred into this filly. Vet checks welcome!! Message with any questions.