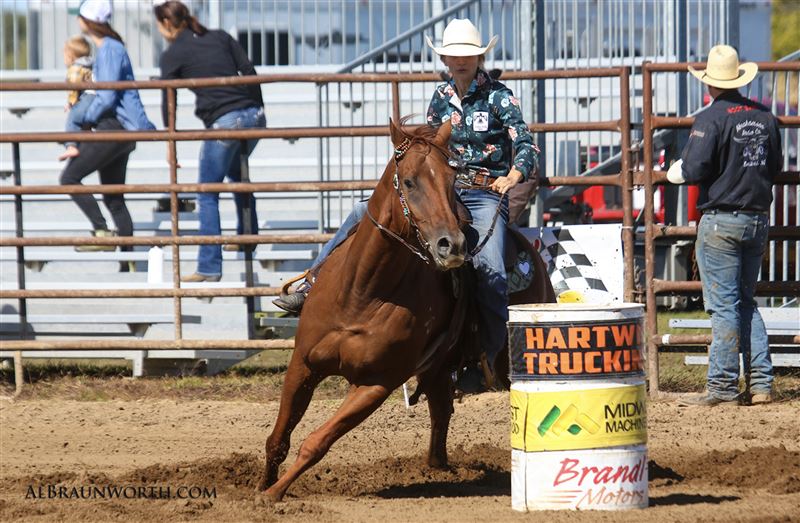 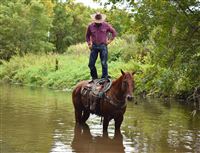 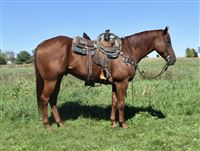 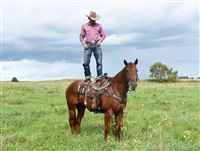 Hankerin For The Win

9 year old OWN son of Letta Hank Do It (MAJOR producer, maternal sibling to Fire Water Flit) out of a daughter of Confederate Leader. This guy is 16.2 hands or so. This guy is BROKE, and quite honestly, a favorite.

I was taking a few shots at the local bar and I got a phone call from a gentleman I have done business with offering me this gelding. Did I need him? Absolutely not. Did the liquor tell me that? Absolutely not. So well, to say I bought him by accident, yet on purpose, you get the drift. Not many questions were asked (this is important). He came up from Texas and he did not disappoint. He quickly became a favorite around here.

He is BROKE. He rides inside, outside, with a bridle, without a bridle. This is the horse you want to saddle up when you have a bad day and want to go think it out in peace in the corner of a hay field. I would trust anyone aged 5-85 on this gelding at home. He has been getting used to pony colts, rope colts, break colts, and push colts around in the round pen. Honestly, he has been, in quite literal terms, a work horse here, yet somehow is willing to meet you at the gate everyday to put his halter on.

Quickly did I remember from my grey conversation, he is also a finished head horse - would you look. at. that. He has won at local roping jackpots, has had “newbie” ropers take him out of the box on the head side, scores well, and really, just an overall saint when it comes there. That is what he has been doing down south. So I sent Cole off to rope on him, and yessir. He is a rope horse.

Surprise! I come to discover he is also finished on the barrels. He has 2D earnings all over Texas. Small jackpots, big jackpots, Amature rodeo earnings, I think even pro rodeo earnings? I have no idea. Not my thing.

Lord knows I would probably stab myself with a fork before I’d hook up and go back and enter in any type of pen myself, so I did the normal thing and loan him out. We had him entered locally, including some slack at an amateur rodeo for giggles. He turns like a little horse. I actually got a call when he came home after one weekend, with someone who wanted to buy him just after watching him run once, and I kinda shrugged it off. I had plans to put him in a sale to go as a big, safe, trail horse. (since apparently that brings the most moolah these days).

I am his third owner. I was able to connect with the lady who raised him, patterned him on the barrels, and dang near gave her heart into this horse. I wanted to hear more about his wins! Turns out - he is a bronc! (was??? a bronc?).

Well, keep reading. She owned him for almost 7 years. He has NEVER bucked at home - she told me, even when he was getting broken out. Somewhere between the second and third barrel in the very recent years, he dirty dog, grand slam, bumper cars, monster truck jamboree at your local county fair, spongebob squarepants bucked her off. He has done this 3 or 4 times over the course of a few years. He only ever did it in the month of May (astrologist horse???) and **ONLY** between the second and third barrel. NEVER at home. NEVER warming up. NEVER in any other setting but at a jackpot. She vetted the heck outta him, nothing. She sent him to a roper who USED used him for months, and finally. He claims he would never buck again, but she said “eff-it” as we all should sometimes, and let him go before running him again because, well, we all sometimes should just let it go.

Well (lol) since I got him from a different gentleman and asked little or few questions, we’ve entered him and ran him a few times before knowing this. He hasn’t done it once. But maybe it’s like a fun game at the casino. I have no idea. If you decide to take him intentionally for the barrels, you will sign away your life on the dotted line with me that I have, in no way, misrepresented this horse if he comes back to his old ways. But, I should tell people he is patterned, cuz, would it be honest if I didnt?

He is the PERFECT head horse for ANYONE, trail companion, home horse, or everything and anything else.

Heck, maybe he will run barrels again, I honestly don’t know or care I guess. I am just doing my job. I personally want him to go off and keep roping, but his past is worth mentioning.

He has minimal minimal maintenance, and really, that is ONLY if you want to enter him on the barrels. He had tie back/removal, so he does “roar” under hard work (He has been scoped 8+ times in his life and comes out perfect) Other than that he is a hard footed, barefoot, board sound, thick legged gelding that will move off without a hitch.