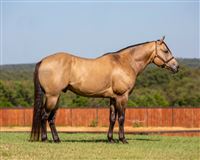 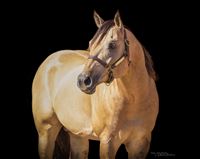 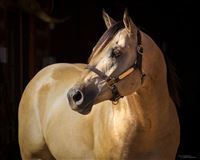 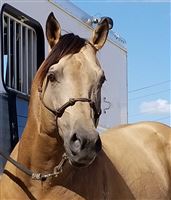 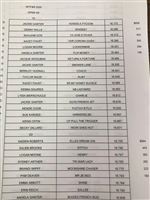 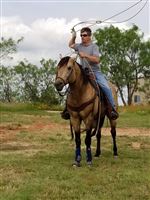 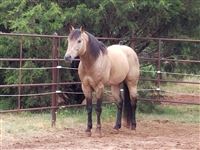 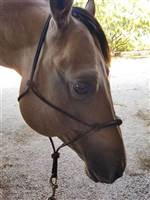 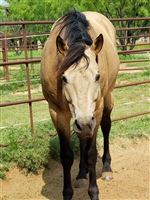 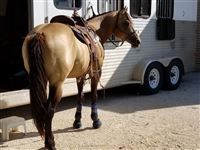 You can contact me (Sue Karges) on Face Book or just search #Hankerelse; or call me at 325 280 3956 and leave a message and I will call you back right away. I don't answer numbers I don't know. Or email skarges2562@gmail.com. Website www.crossarrowk.com.

Ranger is now an enrolled stallion in the Tomorrow's Legends Incentive Program.

We have frozen semen available.

Video 2) September 22, 2020 - 72 head. Ranger ran a 15.967 to win with just 4 others in 1D and the next closest time Patty Clark with a 16.238 on her awesome Dashin Bob. Thanks to all my fellow racers who have watched him grow up and cheered him on. I am blessed. Oh, and thanks to Jamie Pritchard for amazing video and commentary.

Many references readily available to tell you about the temperament on this stallion. He is a gentleman and a joy to be around. He is still lightly hauled for an 8yo, as we were very busy this spring hauling him 4 hours round trip for each collection at Weatherford Equine Breeding Center. I tried to run some during breeding season and he did very well . His first crop was born this year and they are really stamped with beautiful heads and big apple bootys like their dad. We got awesome mares bred this year including daughters of Stoli, Chasin Firewater, Perks Alive, Hollywood Vintage, Bullys On Fire, and Mr Sun Olena.

This horse loves to turn a Barrel. He is dead quiet until you ask him to run, and then he will fire very nicely. Not stud lazy, just a quiet willing mind. I run him in a Bozo side-pull and he is very light. I rarely exhibition him. If you are looking for good feet and bone, he is your guy. His feet are hard and grow down without flaring or chipping. He has a wonderful natural cup to his soles which holds the ground. We run him barefoot and my husband shoes. He is 5 Panel Negative.

Stallion fee $900 – We will give considerations for direct daughters of top proven stallions, multiple breedings, and also for mares who have themselves performed as 1D or rodeo earners in competitive markets/circuits. I will honor live foal guarantee for up to 1 week of age on the foal as so many die after the stand and nurse clause standard in the industry. If we breed your mare it is because we want a foal out of your mare out in the industry.

Hankerelse is by Letta Hank Do It (champagne palomino), by Snazzy Hank SI 104. Letta Hank Do It was a Barrel Futurity, Derby, and WPRA earner, and Finalist at World Championship Barrel Futurity, Lazy E Barrel Futurity, Texas Barrel Derby, etc.; AQHA point and money earner, with proven ability in roping and cutting. He is sire of over 15 Black Type Multiple Barrel Race and Futurity Champions such as Imanonstop Princess-ridden by Jackie Jatzlau. As a maternal grandsire he has produced 2016 Fort Smith Futurity Champion KN Penellapie and Imanonstop Fame—2015 American Semi-finals Champion. He is maternal brother to Fire Water Flit, both out of the legendary Slash J Harletta; recognized as an all-time maternal producer of barrel horses. Slash J Harletta was 1961 AQHA Open Perf World Champion and National Finals Rodeo qualifier, dam of 8 foals; 6 were Black Type barrel horses with total barrel earnings over $500,000. “Harletta” produced 3 NFR qualifiers, and five other offspring that were futurity and/or derby champions

Hankerelse is out of Rosa Runner - 2012 BHN Stallion Register listed Rosa’s sire (Runnerelse) and dam (Livin Proof) as the #17 Five-year Leading Barrel Magic Cross. Non-Equistat earnings for full siblings include WPRA, Prairie Circuit Finals, College NRF Qualifiers and regional champions. Runnerelse (1981) had barrel race LTE of $50,000, and was ranked #4 in barrel horse sires in 2009, and multiple listings in Barrel Horse News 10-year stallion stats top twenty horses. He is the sire of Runnin Richochetbar $160,000 - 2009 Lance Graves Pro Classic Champion winning $109,000 while sweeping the Slot Race, the BFA Futurity and Race 2 in the NBHA 4D Super Show; Jettas Joker $120,000, etc. Runnerelse was by Magnolia Bar, and out of Buck's St Pat – $40,000 plus barrel race earner and multiple rodeo titles, including winning MSRA Finals from 1980-1983; MSRA Barrel Horse of the Year in 1984. Rosa’s dam was by a son of Rebel Cause, and out of a daughter of Gallant Jet.

Past Highlights:
August 8, 2020 - Ogden 8 and Under at Sweetwater Texas was 5th in 1D average
July 19, 2020 - West Texas Barrel Racing Assn Marie Voss Memorial Run at Snyder TX rodeo grounds won the 2D
July 3, 2020 - West Texas Rodeo Assn Jackpot at Sweetwater TX was 4th in 1D
May 5, 2020 - Ran 2nd in 2D, 9th over-all at Stephenville Tuesday jackpot, 143 head of Texas toughest.
November 26, 2019 - Stephenville TX Tuesday night 89 head, won by Stevi Hillman. Ranger was 3rd in 2D with no exhibitions. 18th entry.
November 19, 2019 - Stephenville TX Tuesday night 90 head, won by Hailey Lockwood. Ranger was 10th in 2D with no exhibitions. 17th entry.
November 9, 2019 - Ranger is making progress! We did a "fly into the danger zone" and ventured to the Parker County Arena at Weatherford for his 16th lifetime entry. No exhibitions and first step ever into this pen he was solid middle of the 2D with lots to fix. Congrats to Top Gun Lisa Nicholas with another amazing run on Stoli My Guy, who topped 336 of the baddest in TX. He was again a total gentleman and cool as a cucumber waiting for his turn to run.
Tuesday, Oct 22, 2019 - Ranger wins the 2D Buckle for the Hawley, TX series. This was his 15th competition run and no exhibitions.
Tuesday, Oct 14, 2019 - Ranger wins his first Barrel Race at Hawley, TX, 55 head! He has been lightly hauled and this is his 13th lifetime entry with no exhibitions. He is really starting to understand his job and he loves doing it.
Thursday, Oct 10, 2019: Ranger went last Monday to Weatherford Equine Breeding Center to learn to be collected and for semen evaluation. He was well behaved and semen quality is excellent. I picked him up Thursday at Noon and drove back to Abilene. Turned him out for 2 hours and then reloaded him and headed for a jackpot at Clyde TX. His attitude was calm and pleasant as always. He was a model "gelding" at the jackpot, and warmed up so quiet I thought he was exhausted from being at the breeding project. I decided to let him coast/run at his own pace as my mission for the night was to test his demeanor after breeding. He flat walked up to the alley, and then dropped the hammer running a 17.752 behind Jan Burns with a 17.634 and Pam Deaver with a 17.751, both on their good horses. His time would have been 3rd in the 1D but his hip caught the second barrel leaving as I think he was a bit stiff in the shoulders from mounting the phantom. He cooled calmly and loaded gladly to head home. I cannot over state what a joy this horse is for me. I am so blessed.